Joe's Pond, The VAST Trail, National Headquarters for the American Society of Dowsers

Danville, VT, a year round retreat for outdoor sports enthusiasts and intellectuals. Visitors and area residents enjoy Joe's Pond, as well as biking and hiking every spring, summer and fall.

Concerts "On the Green"

Every July and August visit Danville, VT for their outdoor summer concert series.

Every latter part of summer and into fall, The Great Corn Maze provides fun for the whole family. An intricate pattern of trails carved through tens of acres of corn make for a fantastic journey for the young and old. 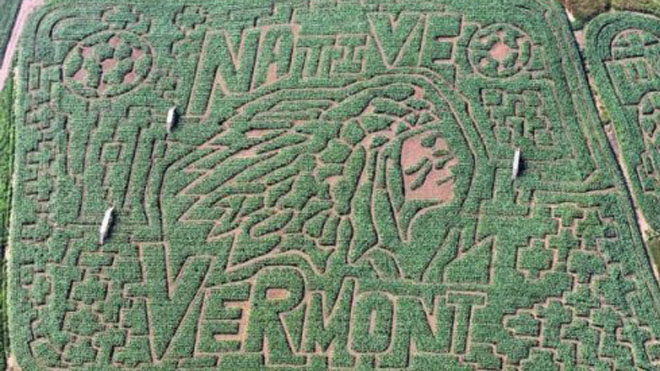 In the winter months, the VAST Trail allows for travel access via snow machine throughout Vermont and into Quebec.  The trails in Danville extend north and south, as well as east and west.  The VAST Trail in Danville, VT Showing Extensions North, South, East & West.

A great place for VAST Trail sportsman who enjoy taking to the trails from this central location, Danville has numerous shops and restaurants to accompany tourists to the area.

The VAST Trail map, above, shows a convergence of the trail system in Danville, VT allowing for ease of travel to points across Vermont and into Quebec.

The Indians named this body of water "Sozap Nebees" (Sozap is Abnaki for Joseph, Nebees means pond, or stream of water). On June 11, 1785, the Vermont Legislature officially named Joe's Pond and neighboring Molly's Pond for the Micmac Indians, Joe and his wife Molly, in recognition of Joe's assistance to the early settlers in this region. Joe and Molly spent their summers hunting and fishing  around Joe's Pond. In the winter, they would generally go south to live at the Ox Bow in Newbury among the Coosuck Indians there. It is said Joe was restless and often left Molly for long periods to hunt and act as scout for Generals Jacob Bayley and John Hazen during the Canadian campaign at the time the military road was being surveyed and built (1775-1776). The early settlers learned survival skills from Joe and Molly, and the two Indians had many friends. The Vermont Legislature awarded Indian Joe a small pension for his assistance over the years.

The outlet of the pond afforded abundant water power, and the community known then as the Palmer Mill Village, after William Palmer who owned some mills and a great deal of the land, quickly developed. Once the railroad line from St. Johnsbury to Swanton was completed in 1877, the area became a center of commerce and industry with farmers and manufacturers sending their products to the cities of St. Johnsbury, Boston and New York by rail. The railroad also made Joe's Pond more attractive as a summer resort. By 1887, West Danville had a sash and blind factory, a gristmill, sawmill, two stores, several hotels, a blacksmith and repair shop, and scores of other buildings including a school and church, a granite shed, and a busy railroad station where the public beach is now. See the railroad station on the far left in the above picture. The school, on the far right in the picture, was later moved to the left of the church in the picture, where it sits today. The dirt road in the foreground is Route 2.

Danville is the national headquarters of the American Society of Dowsers and the location of its bookstore. Founded in 1961, the Society's purpose is to disseminate knowledge of dowsing (water witching, discovery of lost articles or persons and related para-psychological phenomena), development of its skills and recognition for its achievements. The Society holds an annual convention in Vermont as well as regional conventions and issues a quarterly journal, The American Dowser. ...More

The town of Danville is located near the Cabot Creamery in Cabot, VT>